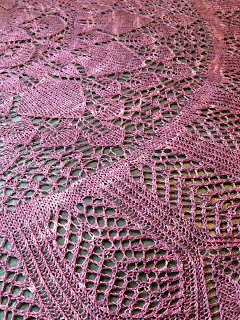 A month ago I was planning to find a new home for this WIP. I was convinced that there was no way I would ever finish the beaded border. It's Susan Pandorf's Evenstar pattern, which calls for 56 repeats of a 20-row knitted-on border chart, and each repeat uses 50 beads. I worked on it for several miserable days in February 2011 (admittedly, I was recovering from a very bad case of bronchitis, which didn't help). I repeatedly dropped beads, dropped stitches, and shredded the yarn, accomplished a little more than 3 repeats, and stuffed the whole thing in a bag in The Closet of Despair™.

Five days ago, I liberated it. It was so beautiful that I thought I'd give it one more try before giving it away. As of this morning, I've completed 30 repeats, more than half the border.

In short, I've got better tools and more experience. 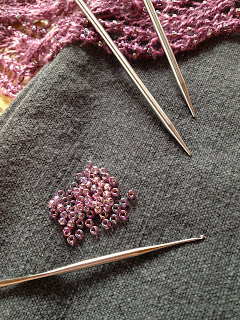 I knit the entire body of the shawl on Addi Turbos-- not the Lace Addis, either, but the regular ones, with their fairly short, rounded tips. Now I've got Red Lace ChiaoGoos (which I'm not sure even existed in February 2011). Not only do they make working the decreases easier (how did I ever slog through all those twisted double decreases in the body without them?), but those pointy points really make transferring the stitch back to the needle from the crochet hook simple.

The crochet hook I was using before was too small for the job, so tiny that that the silk thread didn't really fit in the notch, hence the shredding. The one I'm using now is twice as big (1.0 mm instead of .50 mm), yet still fits through nearly every one of the size 8 beads.

Even having the beads on a "bead mat" (in my case, a clean dinner napkin) instead of in a bowl or a tin keeps them from rolling around while loading the crochet hook. And since I've had more beading practice since then, I can pick up several at a time instead of having to load each bead on the hook individually.

I often tell my students that there's not really any such thing as a project that's too hard, but sometimes a project is too soon. Maybe I should try listening to myself occasionally.

I only live about an hour and a half's drive from Bloomington, Indiana. It's an easy day trip. It's a wonderful "real" college town (as opposed to an ordinary town which happens to have a college in it), with great shopping, dining, entertainment, and an attractive campus. If I could live anywhere in Indiana, it'd be Bloomington.

The problem with day tripping, though, is that at the end of the day, you have to drive home, so somebody has to forgo the wine at dinner. There's nowhere to grab an afternoon nap, and you always get tired before you've done all the things you want to do. So this year for my spouse's fall break, we booked a couple of nights in a hotel right off the town square. (Don't worry, this isn't going to turn into a Diary of my Vacation post.) 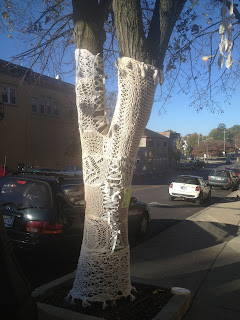 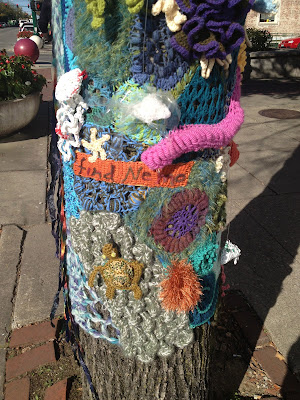 As we approached the hotel, I was supposed to be navigating, but I got distracted by the fabulous lace-covered tree at right. In fact, the downtown Bloomington Entertainment and Arts District (BEAD) was full of tree sweaters! A little Googling turned up the reason: it's a fundraising project for domestic violence victims. You can see all the trees and read about the Knitting to Heal project here.

Another of my favorite trees was, unsurprisingly, sponsored by a local yarn store, Yarns Unlimited. I wish I had a 360-degree draggable panorama to show you all the charming knitted and crocheted sea creatures! 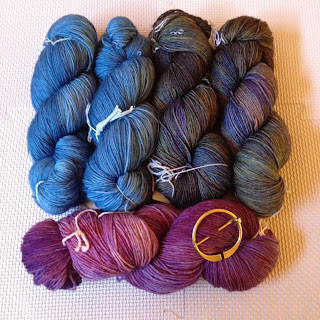 Oh, and here's the obligatory photo of my yarny souvenir shopping from Yarns Unlimited and In A Yarn Basket (all sock yarn, except for the shawl pin. Let's pretend to be surprised). I've recently learned from Twitter that souvenir yarn doesn't count as stash. ;)

My mom phoned me the other day for advice about her current project. It was a supposedly flat-topped hat, worked from the top down; she was dubious about it because it wasn't lying flat. So I recommended she block the WIP to see if that would make it lie flat, before investing any more time in it.

I actually block WIPs all the time. This has become easier since I bought some very long cables for my laminated wood interchangeables; I can just replace the needle tips with the plastic endcaps, and the cables function as flexible blocking wires. (Compared to knitting, blocking crochet in progress is so easy it feels like cheating: just replace the hook with a plastic coilless pin-style marker.)

Here are a few of the reasons I'm frequently pinning something out just before bed: