I've finally managed to resuscitate my Great American Aran Afghan. In honor of Valentine's Day, may I present the recently-completed Barbara Selesnick square: 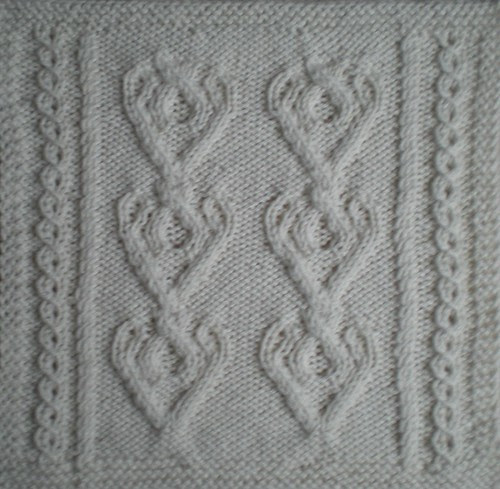 This is supposed to be one of the five easiest squares. Well, sure, if you knit exactly according to the pattern. But when I tried that, it was going to come out ridiculously short; if I added a fourth vertical repeat at that gauge, it would have been too tall.

I monkeyed around with several unsuccessful modifications, but in the end, I chose to add 4 rows of reverse stockinette to the center section before and after the heart motifs.

By the way, here's Susan Rainey's interpretation of the Selesnick square with four pattern repeats.
Posted by owner at 7:49 PM No comments: