I just have one quick little thing to show you today: 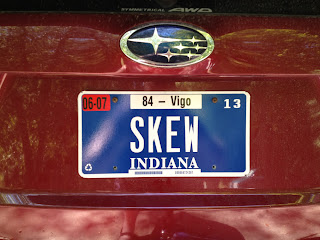 That's right, it's now a Skewbaru.

Stitches go in, stitches come out

So you would think, in four and a half hours as a passenger on the road to Madison, that I ought to be able to get a lot of knitting done, right?

Well, yes and no.

I started the second sock of a pair as soon as we left town, because second socks (usually) require no decisions. But I forgot to bring my design notes, so I had to figure stuff out by looking at Sock One. The first time I cast on, after 6-8 rounds I realized I'd started with the wrong number of stitches. On the second try, I got a little farther before noticing my gauge didn't look right. Sure enough, it was looser than Sock One. So I double-checked my needles and I had brought the wrong size needles: 2.5mm instead of 2.25mm. 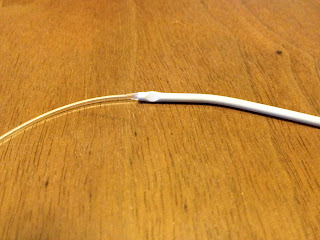 Luckily, I only had to fidget about 45 minutes before we got to Champaign, IL, where we got off the highway for gas, restrooms, and an emergency yarn store stop. I was sorry I couldn't spare more time to browse at Needleworks, but I did get a pair of 2.25mm circulars. Unfortunately, the only metal ones they had in stock in that size were Susan Bates Quicksilvers. I don't mind them for larger-gauge projects (in fact I rather like the finish), but for socks, they were a misery. They have nice sharp points (excellent for lace and twisted stitches), but look closely at the cable join; that little smooshed place is wider than the rest of the needle, so tightly-knit sock stitches do not want to slide over it. After a while I got frustrated and took a nap. 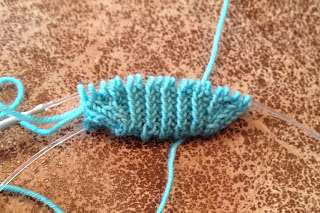 By the time we switched drivers in Rockford, IL, all I had finished was this tiny little toe-start, about an inch tall. I got another inch or so knitted after snapping this photo on the comfy couch in Lakeside Fibers. Mercifully, I was able to replace the offending needles with Chiaogoo Red Lace needles at The Sow's Ear, and finished the toe at Late Night Knitting. These are my new favorite sock needles. I'm a long-time fan of Addi Lace Turbos, too, but I have acidic skin and wear the "slick" off the finish pretty quickly. I'm hoping the stainless steel Chiaogoos will tolerate me better. 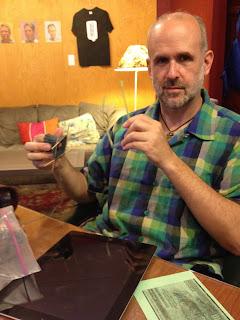 Unfortunately I slept late the next morning and didn't manage to get the instep pattern established before my afternoon coffee-and-knitting date at EVP Coffee, with my friend Jamie McCanless, Madison resident, cool dude, and tech editor to the stars. Jamie's too interesting company for me to set up the instep without my notes while we talked, so I knit a lot of stitches, but only in a "they're all wrong, but it's okay, I'm a process knitter" sort of way. (Guess I should have taken a photo of those completely random traveling twisted stitches before I ripped them out, huh?) 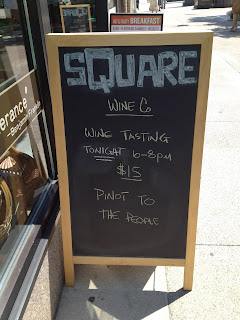 I've done a lot more traveling this year than I typically do. I'm not going to recite my entire 2012 itinerary at you, but I did just get back from four days in Madison, Wisconsin, which is my favorite Midwestern city. It's pretty, pedestrian-friendly, and environmentally conscious (at least, compared to where I live), and there's a great abundance of good food and drink. You can't walk a hundred yards in downtown Madison without the opportunity to buy beer, cheese, or beer-battered cheese.

The reason for this trip was that my spouse was giving two talks at MathFest 2012 and I went along. As a recovering mathematician, I often get to see old friends at math conferences. For example, we had lunch with D. Jacob "Jake" Wildstrom, crocheter, combinatorist, and coauthor of Making Mathematics with Needlework. Jake was kind enough to share an order with me of the finest cheese curds in Wisconsin, to save me from eating them all myself. 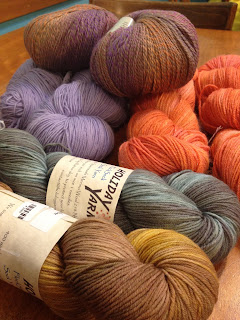 One particularly great thing about Madison is that they have figured out that coffee and yarn should be together. I spent an hour knitting on a very comfortable couch in the Lakeside Street Coffeehouse, which shares a building with Lakeside Fibers. I would have stayed longer, but a heavy lunch was making me drowsy (remember those cheese curds?). I also went to Late Night Knitting at The Sow's Ear in nearby Verona, WI, which may be the Knit Night to end all Knit Nights. I talked to a lot of great, interesting people at both shops and, of course, did a little souvenir shopping.

One of my spouse's talks was about graph theory and blackwork embroidery, and I helped out by drawing some of the diagrams for his slides. Here are the slides for the whole talk; the illustrations with a fabric background are mine.

Now that I'm home, I've got some knitting technical illustrations to draw ASAP. I'll show you a sample of my illustration style and answer a frequent question about Skew at the same time. The original wording for the lifted increases is confusing. So here's a hopefully-clearer restatement, with a picture.

If you're having trouble remembering whether to knit in the front or the back, the key idea is that they are intended to be untwisted. (Of course, if you want them to be twisted, by all means. It's your knitting.)

By the way, MathFest is scheduled to be in Portland in 2014. I'm desperately hoping it will coincide again with Sock Summit, like it did in 2009.
Posted by Lana at 4:54 PM 5 comments: