A gear to wear

This is what happens when a knitting designer has a housemate who is a mechanical engineer: 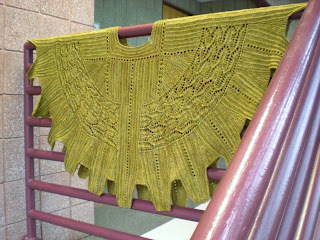 Involute is a full-circular capelet named after the curve that forms the contact edge of gear teeth. Its lower edging consists of twenty-four teeth. The square neckline represents a gear’s square axle opening. Four “spokes” are separated by panels of Arrow Lace suggestive of rotational motion. Garter ridges and eyelets provide texture and laciness, but with an industrial feel. Even the color is reminiscent of antique brass.

This design was originally conceived in response to a call for submissions for the Sanguine Gryphon's fall steampunk pattern collection. They passed on my submission proposal, so I ordered some yarn, knit madly for several weeks, and submitted the completed Involute for the Deep Fall issue of Knitty (punch line: it was very graciously rejected by Knitty also), which meant a photo shoot in mid-July.

I had a great site for the shoot-- I live just down the road from an engineering college. But I couldn't get the sample finished until the morning of the submission deadline, and it was nearly a hundred degrees that day. So here's Involute on my awesome model, as she tries not to melt. (That reminds me, I think I owe that girl some knitwear.) After a few shots with the cool rusty statuary, we hastened indoors for the rest of the photos. 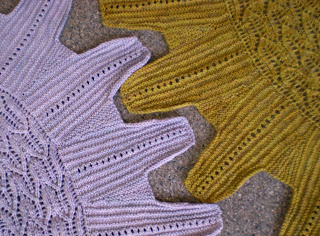 I really did research the proper shape and spacing for gear teeth, so if you have two Involutes-- or in my case, one Involute and a submission swatch-- the teeth do mesh. The photo at left is the engineer's favorite.

Out of ideas for potential publishers and anxious to get Involute out into the world, I decided to self-publish, so Involute is now available for purchase through Ravelry.
Posted by Lana at 3:58 PM 1 comment: