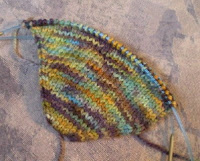 It's been two weeks since Knitty.com released Skew as a mid-Winter Surprise, and I've been ecstatic about its generally-positive reception. I know that no sock construction can be ideal for every foot, but of course I want the Skew sockitecture so suit as many feet as possible, so I've been working madly on fit modifications. Here's what I've come up with so far.

Thanx for all your hard work. Gotta tell you, I've never been gobsmacked with a sock pattern, or frankly ANY pattern, like I have been with Skew. Pure genius.

Just finished my Skews tonight, and I love them!

One of the socks is a little tight when as I'm pulling it on over my heel, but once it's on, it fits well. Because of the unusual construction, I couldn't quite figure out what would give a little more room there - making the foot a little longer before starting the inner ankle section?

You are totally awesome for working so hard on this pattern to make it work for everyone! Thank you.

Thanks for posting these mods. I've been working like a crazy woman to get the needles free from another project so I can cast on for the Skew. Just started them yesterday--so far, I'm intrigued.

Thank you for the mods! Er, just to double check, for the higher instep, we should do the (k1, RLinc, k1) six times, not twelve?

Thanks for the tips.
FYI I think you may have a typo on your "higher instep" recommendation:

Sorry about the typo in the high-instep instructions; it's fixed now.

I think it's really cool that you've posted all these mods, and wanted to add another suggestion to the pile:

I tried both your "higher instep" mod and the short-rows around the heel band, but found the ankle was still too small for my heel to fit through (not just the band around the heel, but the actual ankle above that, where you continue knitting after you've kitchenered the heel). Doing increases on the sole doesn’t help because they cancel each other out when you sew them together at the heel. So I added 6 sts to the instep as follows: on the “k around” rows in the foot repeats, I added 1 increase 2 sts from the COR (the same place where you normally do the increases), but only on the instep side (2 sts before COR for the left sock, 2 sts after COR for the right sock). I did 20 repeats of the “Foot” section and did my extra increases on repeats 9 - 12, 14, and 16. This fixed all my fit problems--gave me a higher instep and a roomier ankle--and I didn’t need to do any of the other mods.

Presumably you could also add sts by decreasing along the decrease edge every 4 rows instead of every other row.

I have narrower and shorter feet than the original pattern but found it very easy to figure out how to make my own mods for the right fit. Love, love, love this pattern! Just posted a review on my craftalong blog.

As usual, I am late to the party. I just heard about this pattern on a recent podcast (I forget which one, since I listen to so many). I wondered if you had any mods to suggest for someone with size 11 feet? I suppose I could just go to a looser gauge, but that usually ends badly for socks (they either feel bumpy or wear out faster). If not, I guess I will just have to find someone with smaller feet to knit them for! It is truly an amazing pattern.